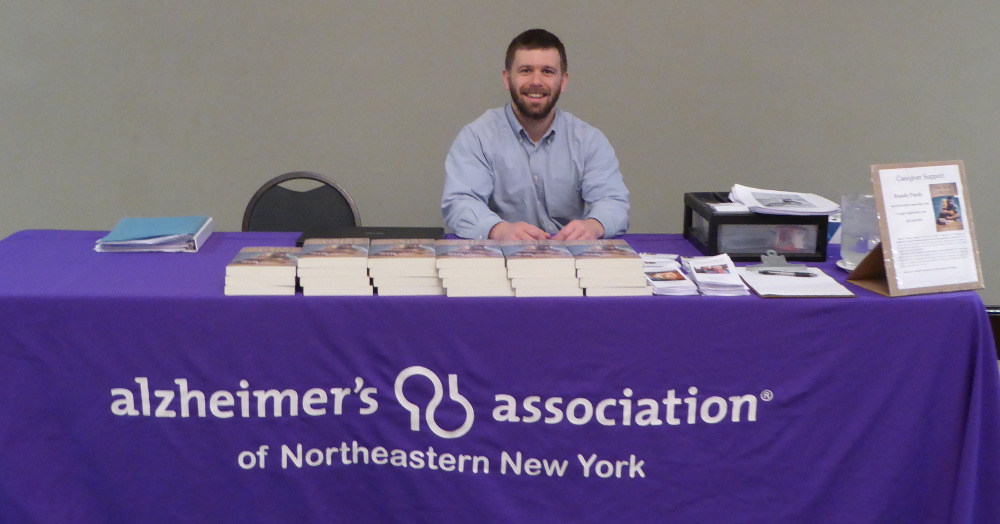 The atmosphere was quiet and orderly as people began to trickle into the conference room in Oneonta NY on the morning of April 28th. The early arrivals soon swelled to a crowd, and by the start time of 10AM few seats remained empty. A murmur of chatting bubbled around the room, occasionally punctuated by a louder greeting as someone spotted a familiar face. An air of attentive expectation permeated the gathering.

In these special places I feel something peculiar: the sensation that all of us in the room are fellow warriors in a common battle. We all know the struggle of Alzheimer’s. There is an oddness in knowing that you share an intimate and painful struggle with a room full of strangers–but there is something comforting about it, too. Because in that room full of special people you know you are not alone, and they are not quite strangers. This common bond also makes it a bit easier to share vulnerable stories, which is what I was about to do.

After my caregiving journey I could have walked away and never looked back. Instead, I wrote a book and a year ago began traveling to share my story and encourage others. I don’t regret the choice, but there is a delicate balance when the story holds some tears and darkness. If I am not careful the sharing can become an endless dwelling on hard things and an inability to see beyond what is lost. But that is not what I want my sharing to be, and I always bring my story around to a better perspective. While I can honestly share in the sorrow we all know, I also bring us all back to some laughter and a deeper joy.

It is incredibly worthwhile to take others through this journey, but even after a year of speaking I still haven’t found it any easier. The story of Alzheimer’s is rough, and there is no way around that. Still, I know the words are important and so I speak them.

My speaking events last year ran into November after which I took a few months off from traveling to recuperate and prepare for the next year. This April conference was the opening of my new year of speaking events and so–even though I had prepared–I was feeling a bit rusty as I waited for the opening moments of my keynote address.

I needn’t have worried about being out of practice. When the event organizer finished her introduction I went up to speak and felt everything come back as if I had last spoken yesterday. It was my journey, it was their journey, and we would share it. Together we would walk through how to face Alzheimer’s.

I have a little metaphor for what Alzheimer’s is like. I say, “Imagine that your mind is your house, and Alzheimer’s is a thief that begins breaking into your house and stealing your stuff. At first you don’t notice that anything is missing, but as the days and months pass you begin to notice a few things are missing. They are only minor things so at first you aren’t worried. But as the months continue to pass you begin to notice more and more things in the house that is your mind are missing. And now you are worried. What is happening to all your possessions? Soon, whole rooms in your house are empty. Now you are scared. Eventually, someone tells you the name of this thief. Maybe it is your family, maybe your doctor. They tell you that this thief’s name is Alzheimer’s and it will steal everything you have until you have nothing left. And there is nothing you can do to stop that thief. That is what Alzheimer’s is like.”

I find the metaphor apt in illustrating how frustrated, scared, and helpless Alzheimer’s makes us feel. It catches the attention of an audience every time. From there we go on the journey.

When I give a presentation the best part–and at the same time the hardest part–is the reaction that comes from the audience. Attention and positive reaction lets me know I am making a connection with the audience. But then crying from the audience is also a sign that I am making a powerful connection. It is hard enough for me to keep my own composure when I am sharing the Alzheimer’s journey and it becomes nearly impossible when faced with people openly weeping because of how my story is touching their hearts.

My story that morning moved the conference audience as much as I have seen a group moved before–in all the good ways and in all the hard ways. There were several times when I had to look away from the front row because the sight of the tears there made it too hard for me to continue. It’s not a bad thing–sometimes the most important thing for us to do is share our griefs and sorrows–but it is hard. As the speaker I have to make it through the entire presentation.

Afterwards, people wanted to talk. Some just wanted to share how much they had been impacted by my story, others wanted to share their own. And still others wanted to give thanks or ask for encouragement in their own journey. It was a full day, overflowing with sharing. Most importantly, I think everyone left the conference feeling better equipped to take the Alzheimer’s journey with their loved one. That was the goal.

As an added bonus, the day was a fantastic start to the coming year of speaking events. I am looking forward to sharing with many more people. It will be a great year.

Next post: With the Alzheimer’s Association at The Williamsport Home