In the week of February 20th – 24th I made a long overdue trip to South Carolina in the larger Hilton Head area. I say “long overdue” because the trip was originally scheduled for this past October until an ill-timed hurricane changed my plans. This time around the weather was wonderfully balmy. Coming from the snow-covered north, the warm temperature and gentle breezes felt almost unreal.

Two talks were scheduled for this trip: one at the Greater Beaufort Alzheimer’s Support Group, and the other hosted by Sun City, which is a massive gated community for those fifty-five and older. Coming down to South Carolina to talk was very exciting. When I first published my book and began traveling for speaking events I never could have hoped to see so much of the country as I have in the last twelve months, or to reach so many people. Every new trip reminds me of how grateful I should be for these opportunities.

For making this trip a reality two people deserve special mention, and a big shout-out of thanks. Because of their generosity, Rob O’Keefe and Lynn Ann Casey made my appearances in South Carolina happen. If you had the chance to hear me speak and you benefited then you have them to thank. I can’t say enough about how much they did in facilitating this trip.

The two talks in South Carolina were very different. The first presentation was on Wednesday the 22nd and was at the Alzheimer’s support group. It was a small and intimate setting–as a support group should be. The second event was on Thursday and took place in a large auditorium called Magnolia Hall (see the picture at the beginning of the article). This venue often functions as a movie theater or location for other programs, but for the afternoon I was the only show. At that event we had around 100 people in attendance. There are different things I enjoy about both the small intimate and the large events, but this was the first time I had both types of events back-to-back. It is a bit disorienting to switch venue sizes so drastically in the space of a day.

I was very thankful that my wife Debbie was able to come along for this trip. Not only is it much more fun to have her along, but at Magnolia Hall I really needed the extra help handling book sales. (I have learned I can’t talk, sign books, and handle monetary transactions at the same time.) I hope Debbie and I have more opportunities to go as a team!

When I come back from these events I always want to share stories because that feels like the most meaningful part. But I think the best stories are the ones I will never know–those stories are hidden in faces that stare out at me from the audience with so much understanding in their eyes. I know even without them speaking that they are walking the familiar hard road.

But there are also the people who come and speak with me afterward in soft voices that sometimes quaver and lips that sometimes tremble with the hurt they have known. I don’t really know how to give adequate words to their struggles. The vulnerability that people can share in this short time is unlike almost any other public interaction. Sometimes it is as if for this small window of time the normal social walls are down and people can speak about some of the rawest parts of their life with a complete stranger. It is a privilege that can be a bit overwhelming.

Then there are the people who send meandering emails to me after the event, sharing about their loved one. This is the silent telling of their story as a catharsis they couldn’t manage in person. There is the man’s wife of fifty-five years, born in France but now never able to go back again. There is such fondness in what he shares, but also an unspoken sadness over all that was and is slipping away.

I hope to come back to South Carolina again. There are many places to see, but–even more importantly–many people to reach. We’ll see what the future holds. 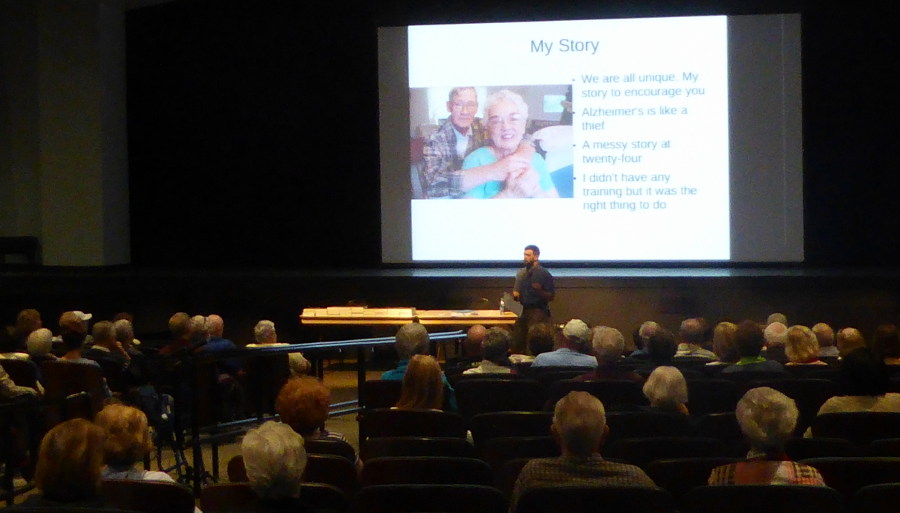