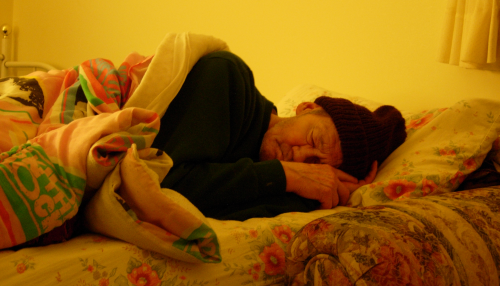 Today I will write about saying goodbye. Yes, Grandpa has only a few more days left. If I said he was dying that would be true, but not very precise. He has been dying for a long time. More precisely, he is nearly dead. It may be a few hours, or at most a few days. His mind has given up, and all that remains is for his body to catch up. 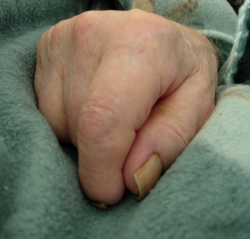 This may seem sudden, but it wasn’t, not really. One thing I have not written about much is Grandpa’s increasing failure to eat. I always meant to write more about it “sometime” but I never made time for that sometime because it was the most painful thing to write about. The struggle to get Grandpa to eat enough has been going on for more than a year, and it is a struggle I have been slowly losing. I knew this would happen from the very day I started caring for Grandpa, but the knowing didn’t make it feel any less like torture as he slipped–inch by inch–down that path. While it often felt like he couldn’t possibly eat worse than he had the day before, his eating began to grow precipitously worse over the course of the summer. If at the beginning of the summer I had to patiently work with Grandpa to get him to eat three meals a day, by the end of the summer he was only eating one meal–and that only if I fed it to him myself. The course of events was pretty obvious. I concluded that he would not last through the winter.

Then he did. At the end of August I caught a mild cold, and I passed it on to Grandpa. Grandpa became a little sick, and the cold made him more tired. His body recovered from the cold, but his mind decided it had finished the fight. He slept, and didn’t want to wake up. He woke up for increasingly brief periods of time, increasingly unwilling to eat or drink, and slipped into a semi-comatose state. Perhaps his last most coherent words were, “I don’t want it! I don’t want it! I don’t want it!” when I tried to feed him some chocolate pudding. What did he want to do? He wanted to sleep, to rest quietly, and to not be troubled with the troubles of life anymore. 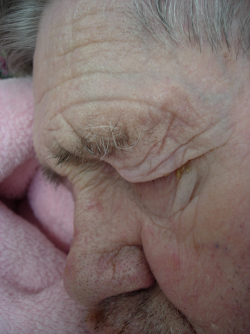 I knew it would come to this, but that knowledge doesn’t make it easy. One of the special cruelties of this is that Grandpa has such a healthy body that if his mind had not been afflicted with Alzheimer’s he might have lived to be a very old man. So, even though his mind has shut down so that he does not interact with the world, and does not remember how to eat or drink, his body still continues on. The last time he really ate or drank anything of substance was on Friday the 4th of September, and we are now to Wednesday the 9th. Over the course of the succeeding days I have managed to coax a few dribbles of liquid down his throat–first with a spoon, then an eye-dropper–but still his body keeps going. He breathes regularly, quietly, his eyes closed, his body slowly consuming itself in a determined effort to keep going. One could call it a coma, but sometimes, for a brief moment, he opens his eyes a bit, and if you are lucky he will drag them into focus to look in that instant at the world, before letting his eyes drift back shut. He is still conscious of sounds, he recognizes voices, and he even smiled when someone laughed in his hearing. But the world is too much for him now, so he mostly just lays there, waiting for it to end.

The most painful thing for me is that he can still feel pain and discomfort. If we have him propped up carefully with pillows supporting various parts of his body he appears to be mostly comfortable. But whenever we have to move him to change his diaper his frail body–and especially his lifelong problem with back pain–flares up and he spasms and whimpers in pain whenever he is changed. I feel like we are putting him on the torture rack whenever we must do that. And then I wonder if he is thirsty. He doesn’t look uncomfortable when he is just laying there, breathing, but I can’t help thinking about how it might feel to be laying there, no longer able to communicate, slowly starving and thirsting to death. What if his throat was parched and he wanted a drink and was laying there, silent, wishing someone would give him a drink? So I give him some water with the eyedropper and he chokes because he can only swallow by reflex now and when he chokes he feels like he is drowning and the expression on his face makes me sorry I gave him something to drink.

What does all of this have to do with saying goodbye? It is when you have the few days when someone is clearly dying, but not yet dead, that you have time to ponder what it means to say goodbye, and how exactly do you do it. You sit there and you stare at the sleeping face, and you wonder what you could do, what you should do. Somehow, however true “I love you” and “Goodbye” might be, they somehow don’t feel like enough. How can you distill a life down to a few words?

But as I sat there, I realized that you don’t. You don’t do anything different. What you say is only as good as what you do. All your life you are saying “Hello” and “Goodbye” in what you do. The substance of your deeds toward each person is what defines whether you have given them a good “Hello” and “Goodbye.” If your deeds toward others are deeds that say “I love you” then no better “Hello” or “Goodbye” can be said. Do you want a life of no regrets, a “Goodbye” that says what you want to say? Then make sure what you do toward others says “I love you” and then whether today it is for “hello” or “goodbye” it will be the best you could give.

I have said goodbye to Grandpa. I said those words, because it seemed like to not say them was some attempt to deny the reality. But mostly I realized that my best goodbye would be to do what I had been doing for the last three years–saying “I love you” all day, every day, by what I did for him. There could be no better, or fully said, goodbye.

So goodbye Grandpa. I love you. But you already knew that. 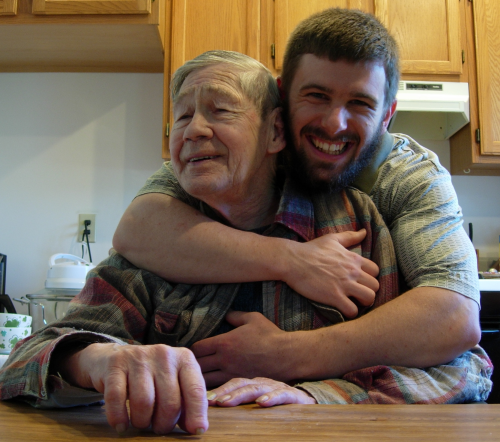